Whatever Happened to Full TV Seasons?

I miss the days of full seasons of TV shows. I'm tired of half-seasons and mini-seasons and "mid-season finales." For the past several weeks, I get a little angry every Sunday night when I remember that, no, there will be no new Walking Dead that evening. Then on Monday, my state o'peeve continues when I'm reminded that Revolution is in its "break." What the crap? Tuesday? No SOA for you! Wednesday? Ha! Thursday? Last Resort has gone deep. Friday? I'm on the Fringe of madness, I tell you. I'm starting to forget what Walter White even looks like, much less what day of the week he used to appear.

Who remembers 24? Jack Bauer knew how to keep a story going, by golly. 24 thrilling weeks of ticking mayhem. 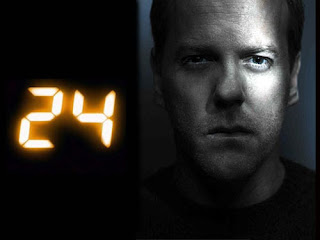 Then Keifer gets me feeling all Touchy and bails after a handful of episodes. Cullen Bohannon is never gonna finish that railroad at this pace, at least not before the skitters fall from the skies. Wait, must rethink that. The skitters are on PAUSE too.

Seeing a tweet about a stolen candy bar made me think about how I love those little white donuts. You know the ones; they're covered in confectioner's sugar that gets all over you when you eat them. Each one is good for about two bites. They're awesome.

That tweet also reminded me of an episode that angered me at the time but is now a fond memory. I go through spells of watching episode after episode of a TV series. Back then, I was on a kick for old Perry Mason episodes. It was midnightish and the VHS (shudder) was feeding me my second episode of the evening when it occurred to me that I had a brand new bag of little white Hostess donuts in the pantry. You know the little thrill of such a realization, right?

Being a delayed gratification kind of guy in such matters, I didn't rush to my bag o'donuts. Nope. I watched Perry and Della and Paul and thought about those donuts. Mentally savored those donuts. Anticipation. It was gonna be a good night. Yum. Then finally, when the time was PERFECT, I headed barefoot across the Berber and tiptoed across the cold tiles of the kitchen...

...opened the refrigerator. Poured me a perfect glass of frosty cold milk. Not 2%. THE GOOD STUFF. Mouth watering? Yup. Opened the pantry and grabbed my bag o'donuts. WHAT THE CRAP?!?!? That brand new bag? Guess what it had in it? ONE PITIFUL HALF-DONUT AND A BUNCH OF THOSE HARD-TO-EAT TINY CHUNKS AND CRUMBS.

Being experienced in such matters, I knew who did it:  ONE OR BOTH OF THOSE KIDS OF MINE STOLE MY LITTLE WHITE DONUTS. Despite lengthy interrogation, neither would really own up to it, but I know they did it. So now that they're grown, when I visit their houses, you think I show any mercy on their pantries? NOPE. And when they gripe because I pilfer a honey bun or a Pop-Tart or a tasty treat from Little Debbie, I just say "LITTLE WHITE DONUTS!"
Posted by Jerry Hatchett at 12:16 PM No comments:

A big HOWDY from Texas!

While I've done a bit of blogging in the past, this is the official first entry in this blog devoted purely to story. Fear not; I'll not get verbose in this intro. I'm Jerry. I love reading and writing and watching movies and great TV and listening to tales around a cozy fire. In addition to daily Bible reading, I mainly read thrillers. I'll watch a huge variety of high quality movies and TV.

On the writing front, I write thrillers. Modern influences who come to mind are Grisham, DeMille, Connelly, Preston/Child, Flynn, Thor, and many others. I've been agented twice. Two different novels, one per agent. I've been watching the recent shift in the publishing world and decided to go independent with one of those novels, PAWNBROKER, a Southern thriller. It's on Amazon now and during the first week of January it will go live on a host of other online bookseller sites.

Thanks for being here!

COMING SOON:  All manner of unsolicited wisdom and commentary.

Posted by Jerry Hatchett at 11:11 PM No comments: