The Projectionist: An Experiment - Please vote!

This is an experiment. The Projectionist is a novel I started a few years ago, and I've decided to see if there's any interest in it among readers as a serial novel. If you find it interesting (or if you don't!), please cast your vote in the sidebar. If it moves forward, you and I will experience the evolution of the story together. I have the big concept of where the story is going, but the details are undetermined. I HATE spoilers, so here is the only clue I'll provide:  The name of the movie theater is significant. Oh, and if you find this interesting, please share among your friends on Facebook, Twitter, Pinterest, email, or any way you choose. Thanks! 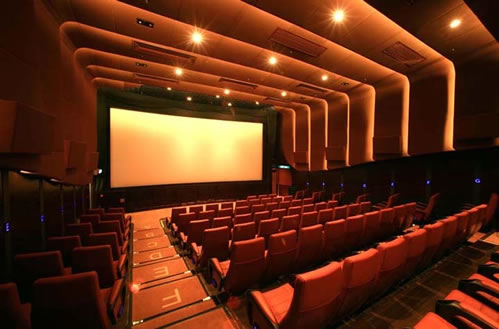 The Projectionist:  Chapter 1 of a potential serial novel

The Diebold Review would tomorrow announce that the Alice Hamlin Memorial was the largest crowd to ever gather at The Magic, which automatically made it the largest gathering ever in Diebold, Tennessee. They milled about the auditorium, where Alice's favorite movie, The Shop Around the Corner, softly played. The balcony creaked beneath a full load. The lobby, the corridor between lobby and auditorium, the concession area. Every space inside the old building, even the sidewalk outside, bulged with townspeople who came to say goodbye to their friend.

Underneath the marquee, its neon beckoning brightly even in the sunlight, its billboard proclaiming GOODBYE ALICE, sat the ticket booth where Alice Hamlin had sold movie tickets for forty-two years. On the counter just behind the glass was a framed photograph, replete with her trademark smile, the bottom of the frame wrapped with a bow of white lace. Inside, where the back of the ticket booth was open to the lobby, stood Porter, Teddy, and the mayor of Diebold, Hank Goddard, also the proprietor of Hank's Superette. Porter thought Goddard always looked to be on the cusp of a heart attack, his fleshy face perpetually red, tiny veins crawling his nose.

"I remember," Goddard said, "trying to sneak in here right after the place opened. I must've been eleven or twelve. I got up in the middle of the line of folks coming in, all scrunched down, thinking how slick I was. Next thing I know, Alice has me by my ear!" All three men laughed. Goddard rubbed his ear. "Man oh man, sure will miss her, Porter."

Teddy pointed underneath the counter in the ticket booth. "There's her foot heater, she called it. Middle of summer, air conditioner running flat out, and there'd be Alice with her electric heater. How long's that thing been down there, Port?"

"I'd say thirty years or more."

"You got to be kidding me, that's amazing," Goddard said.

"Yep," Teddy said, hooking a thumb toward Porter, "but neither has this old fart. All three of us were here the night The Magic opened. She sold the tickets, Porter ran the movies, I sold concessions. Been here ever since, though I sure can't make the same claim on perfect attendance."

"Now that's what I'd call a low turnover. Well, fellows, I better get going. Porter, again, I can't tell you how sorry I am. If you need anything at all, you let me know. I mean that."

Goddard clapped him on the shoulder, gave him a taut little hang-in-there shake of the fist, and was gone. Somebody showed up and pulled Teddy away, and Porter was alone. His first instinct was to grab Teddy, pull him back, beg him not to leave. But he didn't. He looked around at all the people, mingling, talking. Many of them had been to the funeral, then the graveside service, and still wore their black clothes.
Despite the stated purpose of this event, despite the affection for Alice that virtually every person here would profess, most of these people looked happy. They talked. They munched on free popcorn from the concession stand, washed it down with free Coke. They smiled. Until they saw him. The moment that happened, they flicked on their Mournfully Devastated Switch.

There was something fundamentally dishonest about that, Porter thought. You were either happy or sad. And rarely did you go from one to the other in the blink of an eye. Why the act? Why couldn't people be honest: Hey Porter, came by here because people would've talked about me if I didn't. Alice? Yeah, I liked her okay, but truth is, I saw the woman for a minute or so, a few times a year. I feel bad for you, old man, but I better be pushing on. There's a great game on tonight and I hate to miss a kickoff. If I see you again, I'll remind you how sorry I am, though. Later.

That was reality. Wasn't it? If not, why all the happy faces right now while he stood by the ticket booth alone? Alone. That's what he would be from now on. How could he survive? Porter wasn't a man much concerned about machismo. No, Alice had been the strong one. No doubt about that. She was also the one everyone loved. Not him. Alice was the vibrant, public face of their union. Porter was the quiet background. Now her strength, her everything, was gone. He flinched when someone tapped him on the hand.

"Mr. Hamlin, sir?" It was that kid Alice had been so hung up on, Rasheed. Willie and Flora Thompson's boy. She was always paying for him to see movies, buying him popcorn.

Alice. What an old softy she was. You'll be an old softy yourself before I'm through with you, Porter Hamlin. He spun around, looked into the booth where Alice's voice had come from, his heart pounding in wild excitement. The booth was empty. Exhilaration faded back to despair. The voice had been so real, too real to be in his head. Or maybe Porter Hamlin was just losing his grip. Maybe Alzheimer's was reaching out for him, preparing to rein him in with one of its macabre tentacles.

"Hello, young man. Thank you for coming--" Porter finally looked down, saw the kid's face. He wasn't there to offer comfort. He was there looking for some. Swollen tears trailed down his brown face. No switch involved. Porter dropped to a knee, took the boy in his arms, held him while he sobbed. "I miss her, too, Rasheed. I miss her, too."
Posted by Jerry Hatchett at 9:04 PM No comments: