Circa 2008 I did the "VIP" tour here at NASA. ("Here" = Houston. Anyone can take this tour; you just pay something like $80 for the tour instead of the normal $15 or whatever it is.) You get a lot more access, see a lot of the real work going on behind the scenes, eat with the engineers and astronauts, go inside the old mission control room made famous in Apollo 13, where you can sit and play at the same consoles, etc.

We were lucky in that a shuttle was in space while we were there. We were watching the mission control guys do their thing and I noticed among the wall of monitors a smallish area with a black screen and green hex characters. It looked a lot like the picture below. 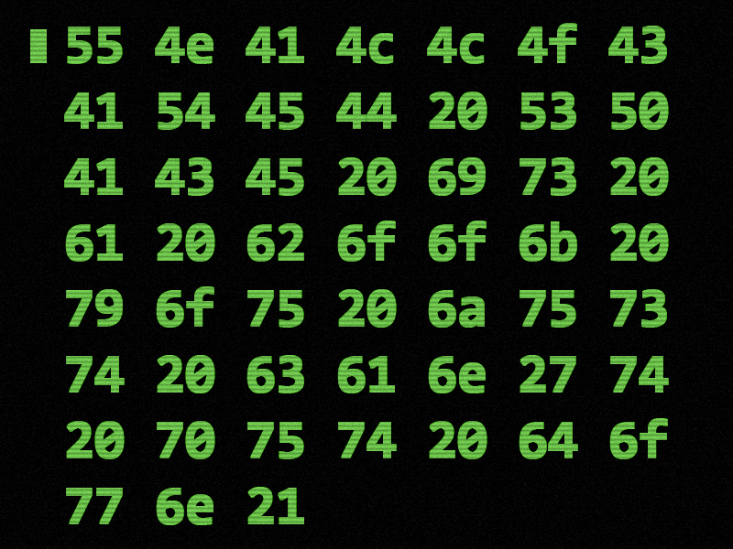 I asked what it was and the guy said, "We call that the scratch pad. It's a live mirror of the terminal on the shuttle. When the astronauts enter a command, we watch and double-check it before they press Enter."

"But why is it in hex?" I said. (After all, even the vast majority of multi-decade nerds like me have never needed to enter any kind of computer command in hex, aka hexadecimal. Yes, digital forensicators of course still encounter these strange looking building blocks of data, but way behind the scenes where the non-nerds dare not tread. Not as a way to tell a computer to PRINT, for example, or COPY something. We were beyond all that a long time ago.)

"They enter the commands in hex," the NASA guy said.

"Sorry, we're still not communicating, because I know we don't have astronauts up there entering flight commands in hex. So what--"

"As in the flight computer? You're telling me that if shuttle astronauts need to change something in their flight plan, they're doing it on the fly, in hex?"

"We still use the Apollo flight control software."

After taking a few moments to compose myself (close my mouth that was hanging open), I said, "That's unbelievable. Why would we still be using forty-year-old software?"

"Because it's the greatest and most stable piece of software ever written, to this day."

Later in the tour, we got to see a cutout of part of a shuttle, the part that contained the racks of computer equipment. They looked ancient because, you guessed it, it was Apollo-era equipment. Racks stacked with row after row after row of big clunky metal boxes and contraptions. Looking at an array of gear perhaps six feet long and four feet high, I learned that this was the still-in-use configuration of "memory." I don't recall the exact amount of memory this conglomeration of iron contained, but it was something stunning, like eight megabytes. (That smartphone in your hand or your pocket contains hundreds of times that amount of memory.)

Yes, this is a true story. And no, I'm not misremembering my decades. It was almost certainly 2008, but definitely no earlier than 2007. I still find the idea of using such antiquated technology to have been a strange approach to flying around space so many years after the Apollo era. But there's probably also a good life lesson tucked in there about the so-called greatness of our knowledge today as compared to years past. The guys who wrote that software in the 1960s were using slide rules, not pre-written libraries of code like we have today. They were the giants upon whose shoulders today's software geniuses stand. Even if they don't know it.

Speaking of space (ahem!), have you gotten your copy of Unallocated Space yet? It's made a bunch of the good lists at Amazon already, but it will be doing even better if you go get your copy right now! You can grab the Kindle edition right now for just $2.99. The print edition is literally days away from shipping, and the Audible edition is in production. It's being voiced by the same stellar narrator who did Seven Unholy Days, William Salyers, a major talent in the world of people with great voices. As a teaser, check out the first chapter below. It's gonna be good!

Posted by Jerry Hatchett at 6:48 PM No comments: